Hoppers are a fascinating group of minute insects that have a wide variety of shapes, sizes and colors.

Most species of hoppers are great jumpers, and almost all are terrestrial and feed on plants.

Like other insects that also live on plants, they communicate with the individuals of same or another species moving the plant either by flicking the wings, or vibrating their abdomen, and amazingly, in some species they can move the plant even without contact.

Their size varies from just millimeters to nine centimeters in one species of planthopper.

Hoppers comprise about 28,500 named species, within four super families among an estimated total of 2,000,000 insect species. But we already know that there are hundreds or thousands of species, hidden in the wild that we need to discover.

When I am exploring tropical rainforests, When I am exploring tropical rainforests, my favorite habitats in South America, my sharp eyes are searching for tiny tree hoppers, about 3mm in length – one of my favorite group of insects. I look for hoppers that are sitting on the top of leaves or on tree trunks that I can easily focus my macro-lens on in good lighting

The 3,400 species of treehoppers are very diverse, especially in the tropical rainforests of the Americas. Tree hoppers are mostly on trees, branches, and leaves. Several species resemble a tree thorn, others caterpillar excrement, some a raindrop and there are some species with really striking ornaments and bright colors. They feed on sugar rich phloem sap, and they produce a sugary excrement, called honeydew.

Several species of ants, bees and wasps which have a symbiotic relationship with treehoppers. Ants feed on the honeydew and in exchange they contribute with security to tree hoppers, defending them from predators.

Some treehoppers are solitary but most of them specially in the lowlands of tropical forest in America show varying degrees of maternal care. There are three kinds of maternal care. The simplest is that the female rests on the eggs until they hatch. Apparently, this behavior decreases predation but not parasitoidism. The second is prolonged maternal care, in which the female remains with the eggs but also protects them from natural enemies, through physical defense with their legs and fluttering wings. In addition, the female cuts the plant to facilitate the feeding of nymphs. The third class of maternal care consists of females actively maintaining clusters of nymphs.

Some tree hoppers have cryptic colors but other seem to have aposematic coloration, a strategy that shows bright colors, and striking combinations of them to try to inform to predators that they are unpleasant or dangerous to eat.

But the fact is that these animals were not so well studied by Science, so we still do not know so much about them, and the actual reason behind these odd designs. Females generally deposit their eggs within the plant tissue, except some species, which deposit the eggs on the surface of the plant and cover them with secretions.

Within the little knowledge scientists have on hoppers, there are several studies that show that acoustic communication occurs vibrating leaves and branches.

These vibrations are identified as a defensive signal in nymphs of some species, in others as detection of feeding sites in nymphs. The vibrations occur in the meeting of mating couples and courtship by the male. All these sounds are inaudible to humans.

Among the natural enemies are birds, which feed especially on nymphs, and invertebrates such as spiders, wasps, flies, bed bugs and mantises. Treehoppers eggs and larvae are attacked by parasitoid wasps and entomopathogenic fungi.

Leafhoppers comprise about 10,000 species that are very abundant and found in a wide variety of habitats globally. Colorations is highly variable and covers a rainbow mix of color shades and tones. The largest species feed on xylem sap, while some of the smallest feed on mesophyll sap and the other on phloem sap or on the combination of all of them. Their hind legs are modified with strong muscles for jumping and are covered with hairs that facilitate the spreading of a secretion over their bodies that acts as a water repellent and carrier of pheromones.

Because leafhoppers are always jumping around and moving fast, they are rather difficult to photograph.

Planthoppers are plant feeders that number about 12,000 species. Planthoppers range in size from 3mm to 5mm and have a wide variety of bizarre shapes. Although planthoppers occur worldwide, the African and Neotropical regions are especially species rich. Nymphs of many planthoppers produce wax from special glands on the upper abdominal and other parts of the body. These are hydrophobic and help conceal the insects. Adult females of many families also produce wax which may be used to protect eggs.

Plant hoppers nymphs also possess a biological mechanism at the base of the hind legs, which keeps the legs in synchrony when the insects jump. The gears are not present in the adults. These organs were known for decades but understand only recently

The 3,000 or so species of Frog or Spittlebugs are best known for the nymphal stage, which produces a cover of foamed-up plant sap visually resembling saliva; the nymphs are known as spittlebugs and their foam as cuckoo spit, frog spit, or snake spit.

The characteristic spittle production is related with the unusual trait of xylem feeding. Whereas most insects that feed on sap feed on the nutrient-rich fluid from the phloem, Cercopidae utilize the much more dilute sap flowing upward from the roots via the xylem. The large amount of excess water that must be excreted and the evolution of special breathing tubes allow the young spittlebug nymphs to grow in the relatively protective environment of the spittle. Normally an animal should not be able to survive on a diet so low in nutrients, but the insects’ digestive system has two symbiotic bacteria that provides them with the essential amino acids.

The foam serves several purposes. It hides the nymph from the view of predators and parasites, and it also works as an insulator against heat and cold, it also provides thermal and moisture control, without the foam, the insect would quickly dry up.

Adult froghoppers are amazing acrobats, and they can jump from plant to plant; some of them can jump up to 70 cm vertically: a more impressive performance relative to body weight than fleas. Spittlebugs can jump 100 times their own length.

Many species of froghoppers resemble leafhoppers, but they can be distinguished by the possession of only a few stout spines on the hind tibiae, where leafhoppers have a series of small spines.

Although many froghoppers have cryptic coloration, many species of the family Cercopidae are brightly colored, with some combination of red, red-orange, yellow, and black, perhaps representing warning coloration associated with reflex bleeding.

Despite the fact that there is no specific information about the conservation situation of this group of animals, we already know that the insects in general are declining around the world at a high rate. The reasons for that can be attributed to::

•Habitat loss and land conversion to intensive agriculture and urbanization.
• Pollution by synthetic pesticides and fertilizers is a major cause of mortality.
•Industrial pollution, that includes water and air pollution are adversely affecting arthropod populations.
•Light and noise pollution.
•Biological factors, including pathogens and introduced species.
• Climate change.
• Overexploitation of forest habitats

Many species of froghoppers resemble leafhoppers, but they can be distinguished by the possession of only a few stout spines on the hind tibiae, where leafhoppers have a series of small spines.

Although many froghoppers have cryptic coloration, many species of the family Cercopidae are brightly colored, with some combination of red, red-orange, yellow, and black, perhaps representing warning coloration associated with reflex bleeding.

Taking macro photos of hoppers. Photographing insects is a fun experience, but  you will need a lot of patience. The first difficult part is to find them in nature. Some of them that are extroverts and have a considerable size, but most of them are tinny and shy. So, the first step is training your eyes to locate them in the wild.

When we are doing macrophotography to portrait small subjects, we need to get really close to them to get the magnification. So, we will discover that every species and even every individual has their own “Personality”, and you will start to learn that every species has a special set of behaviors and strategies to survive. You will find yourself playing hide and seek sometimes, and you will discover yourself with your belly on the ground, on the mud and even inside the water.

Grab your camera and macro lens, suit up in old cloths, and go to a field, meadow, or garden, and get down on the ground to have a fun time finding and photographing hoppers! 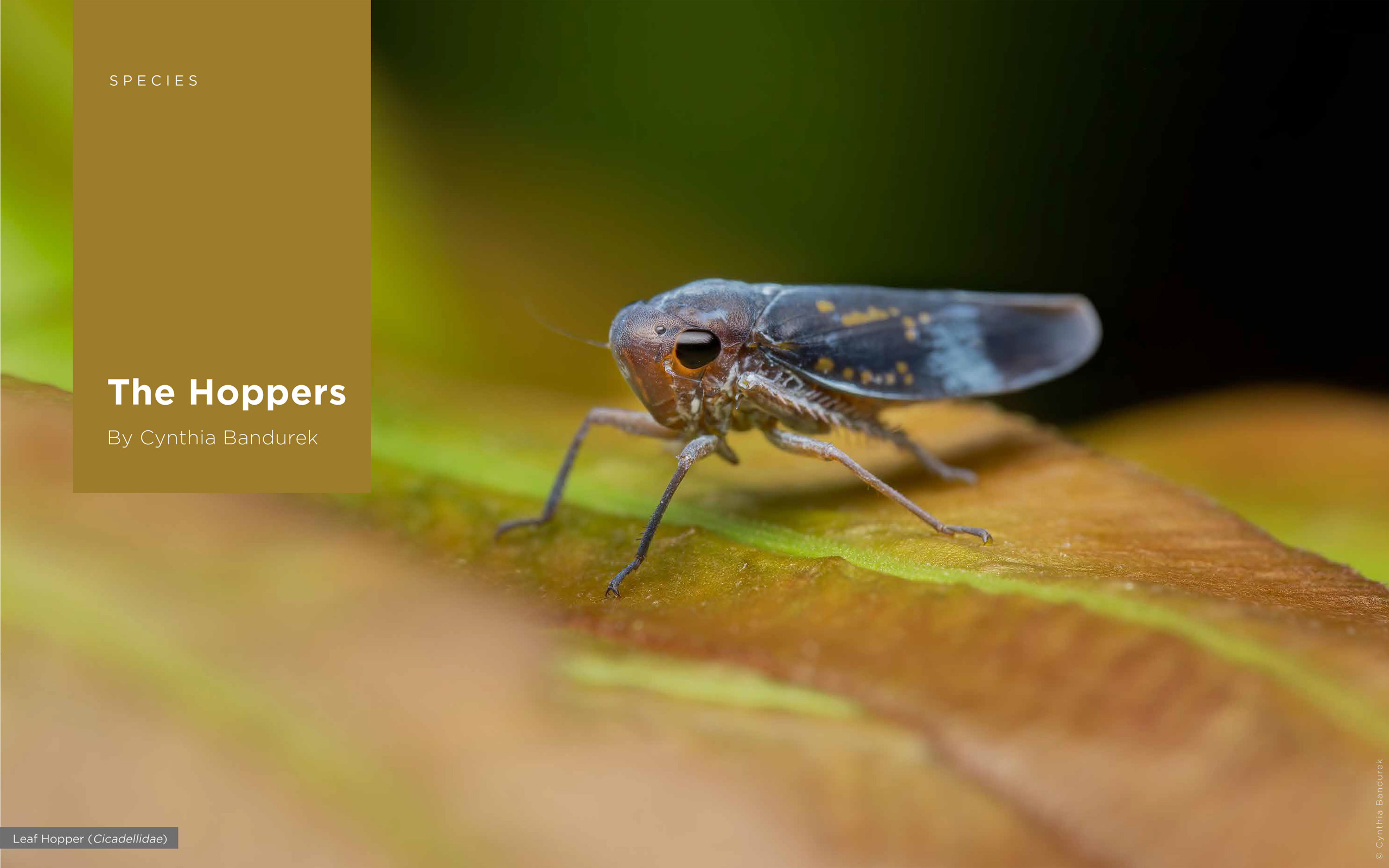 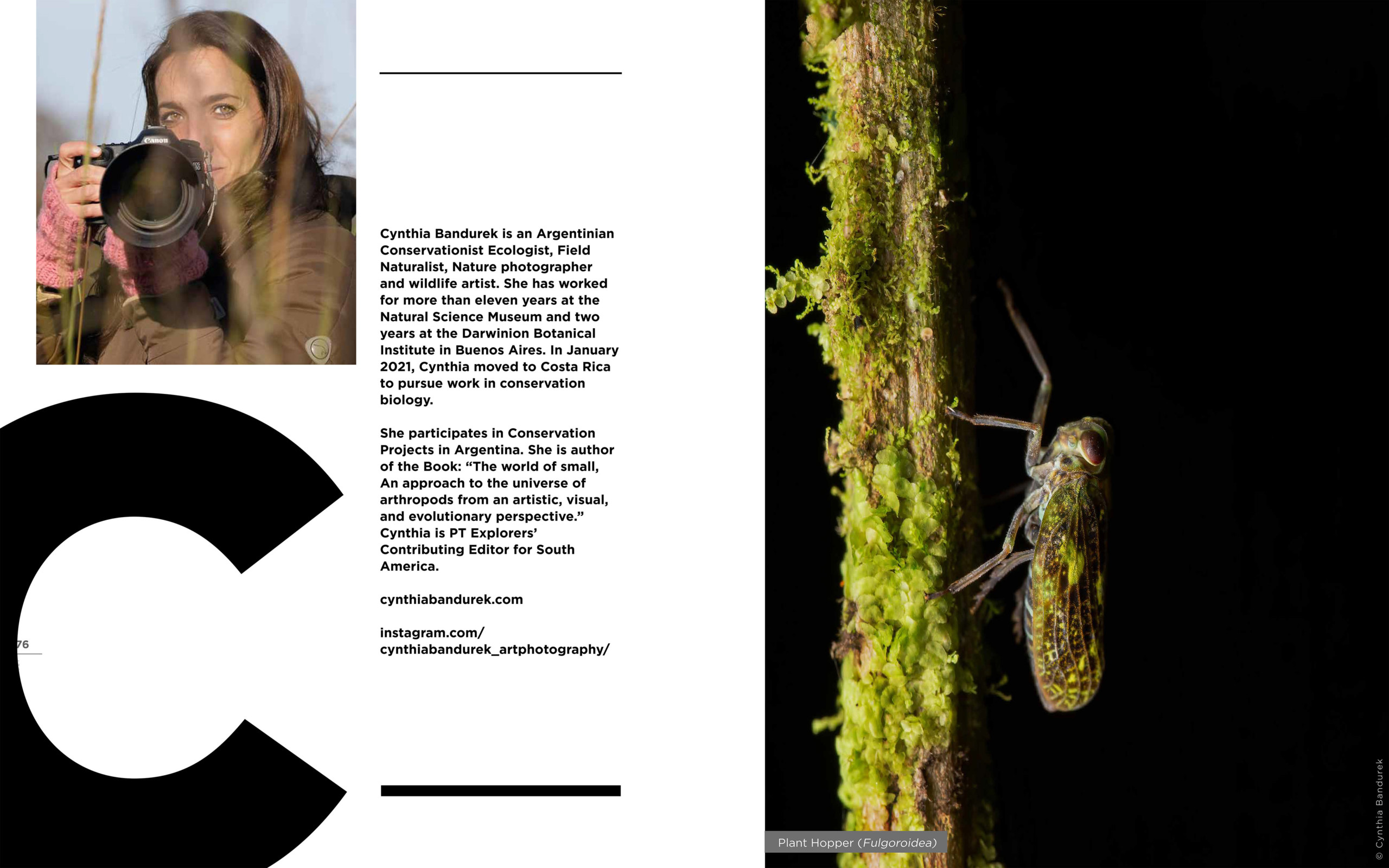 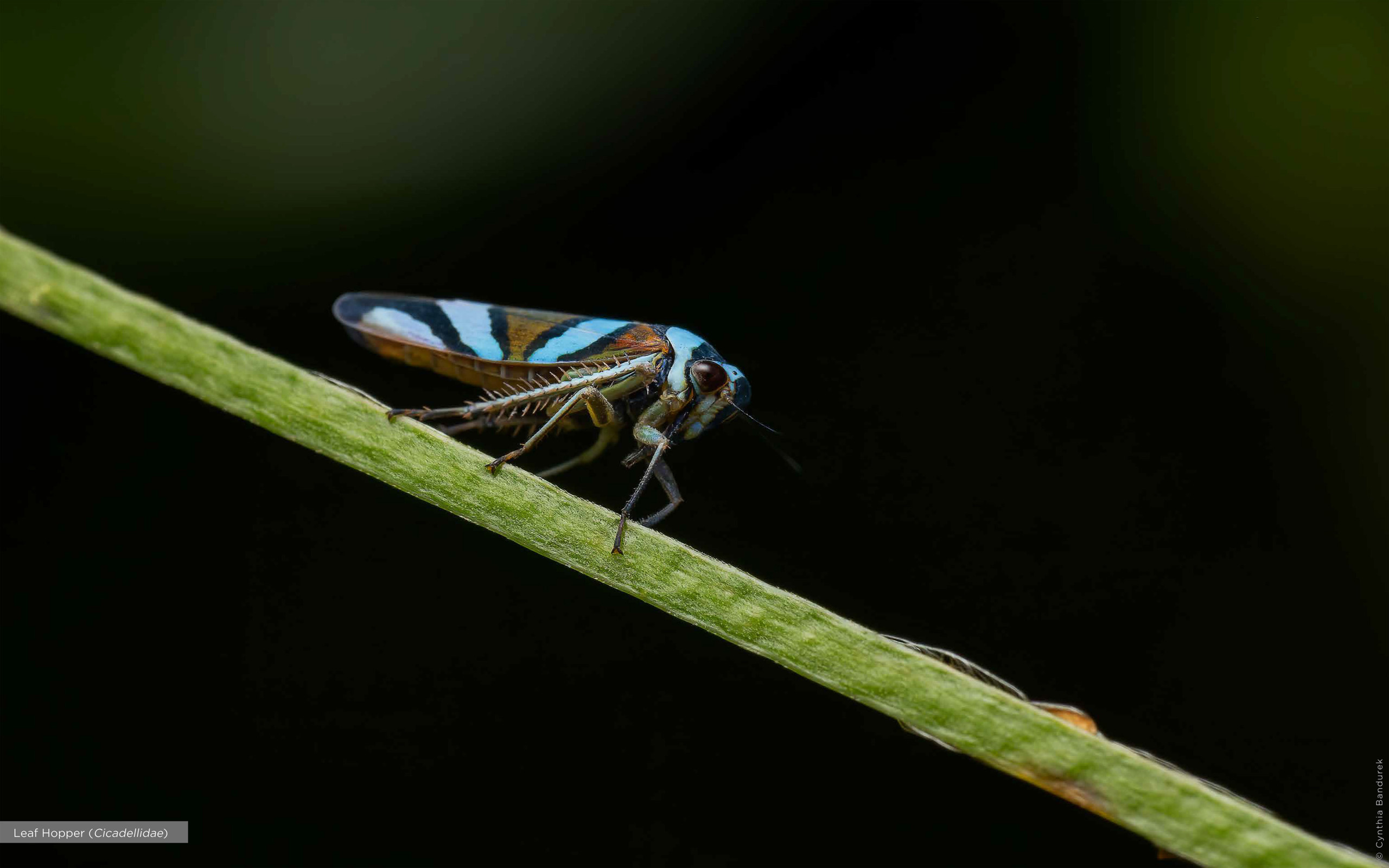 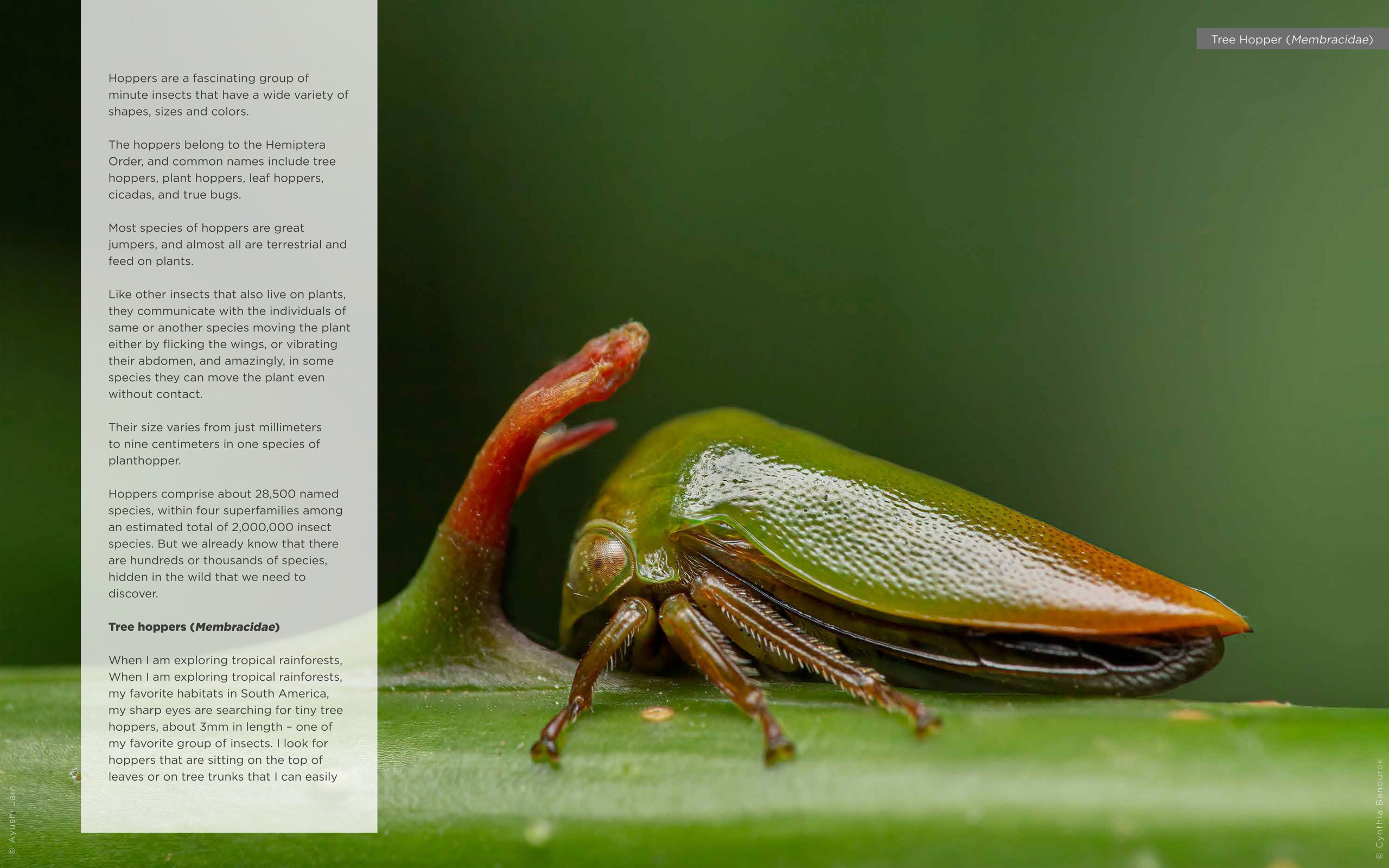 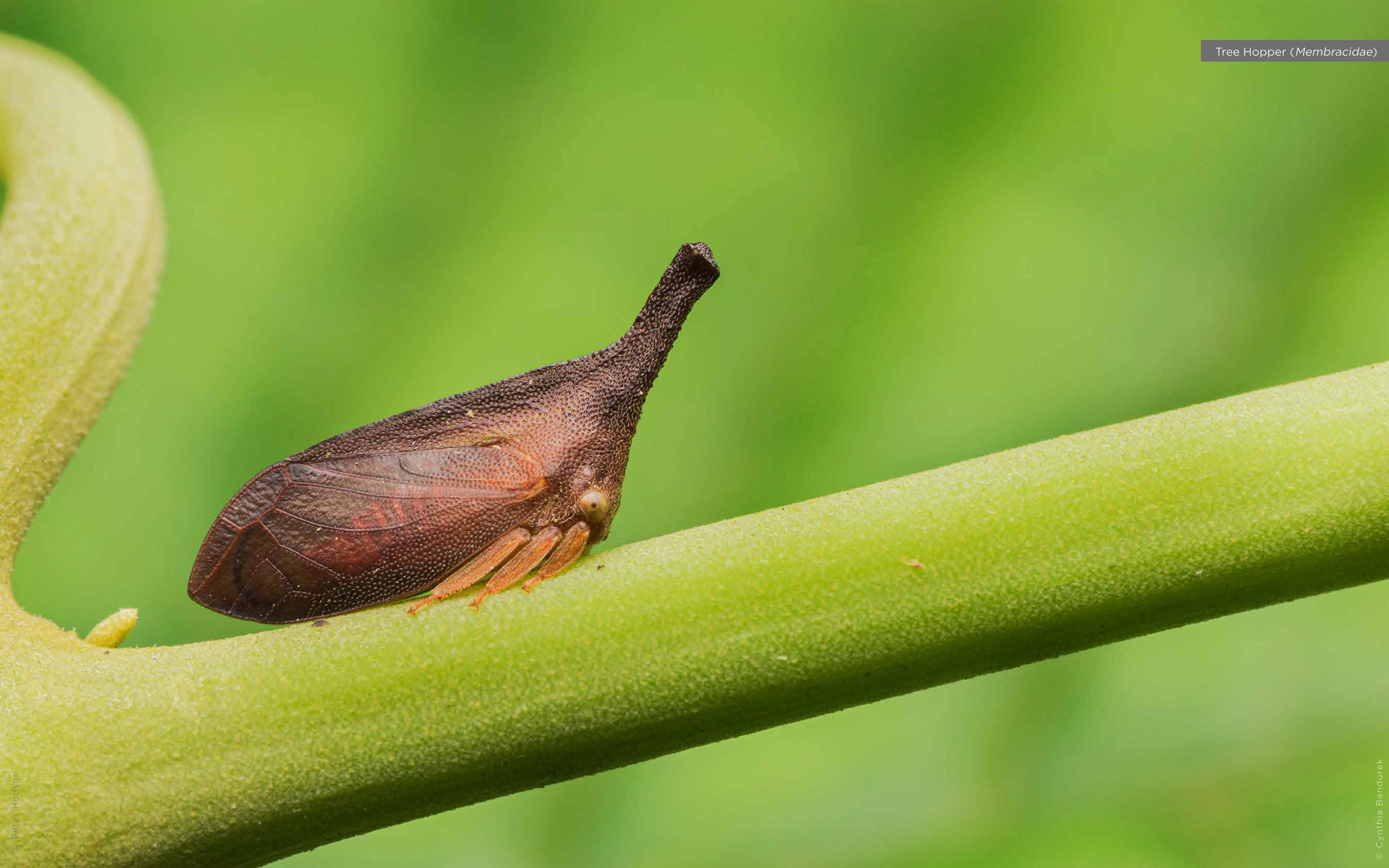 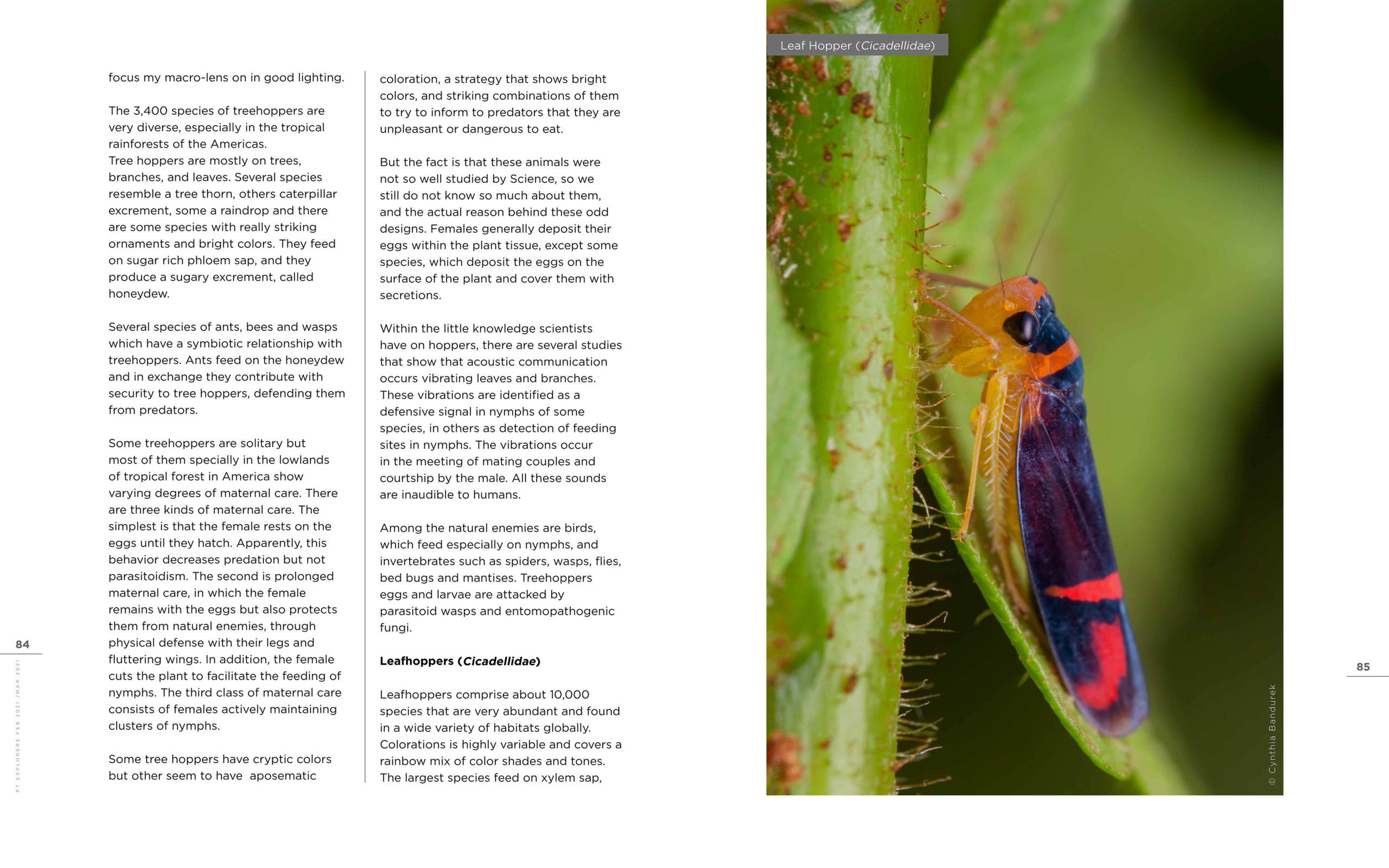 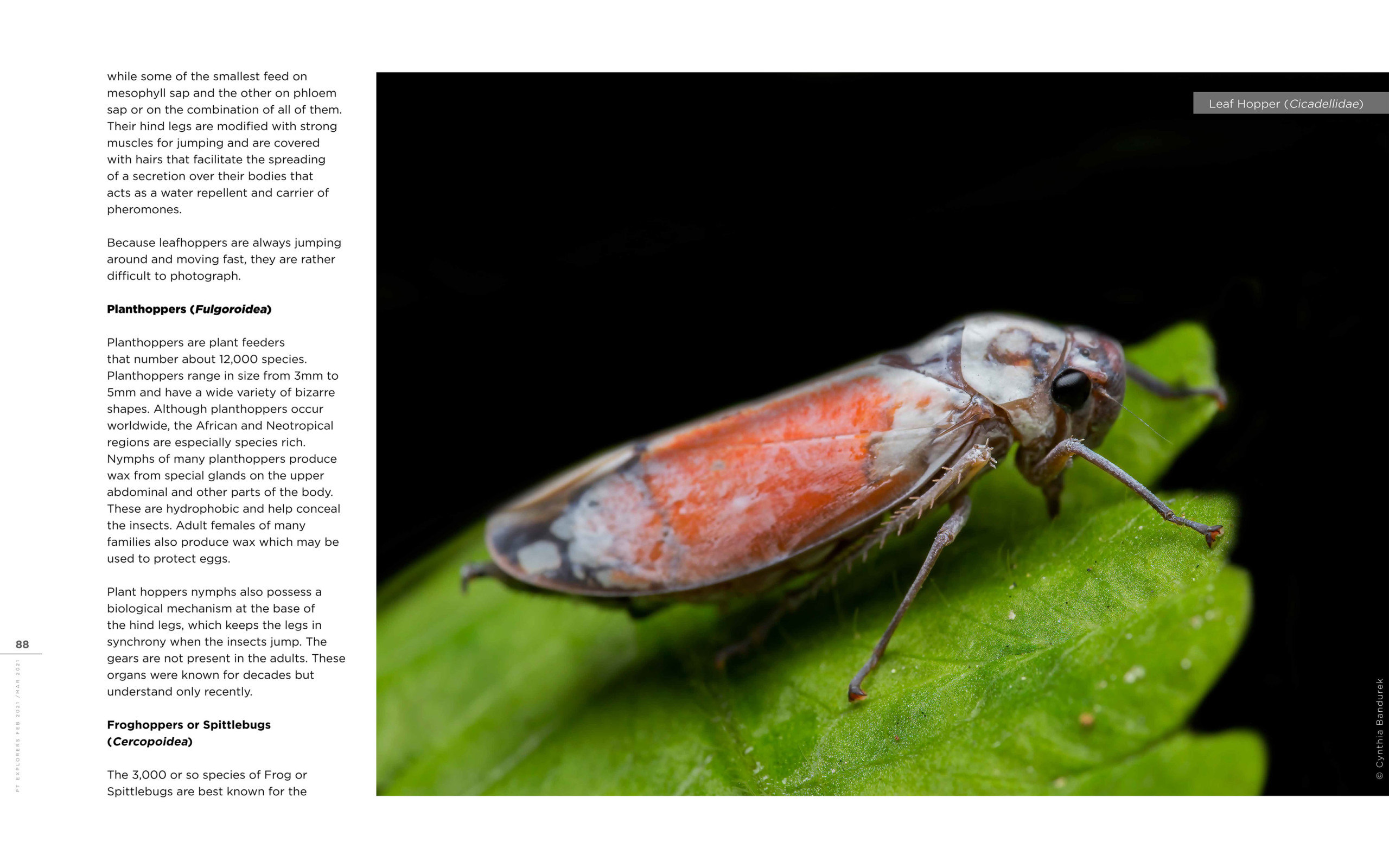 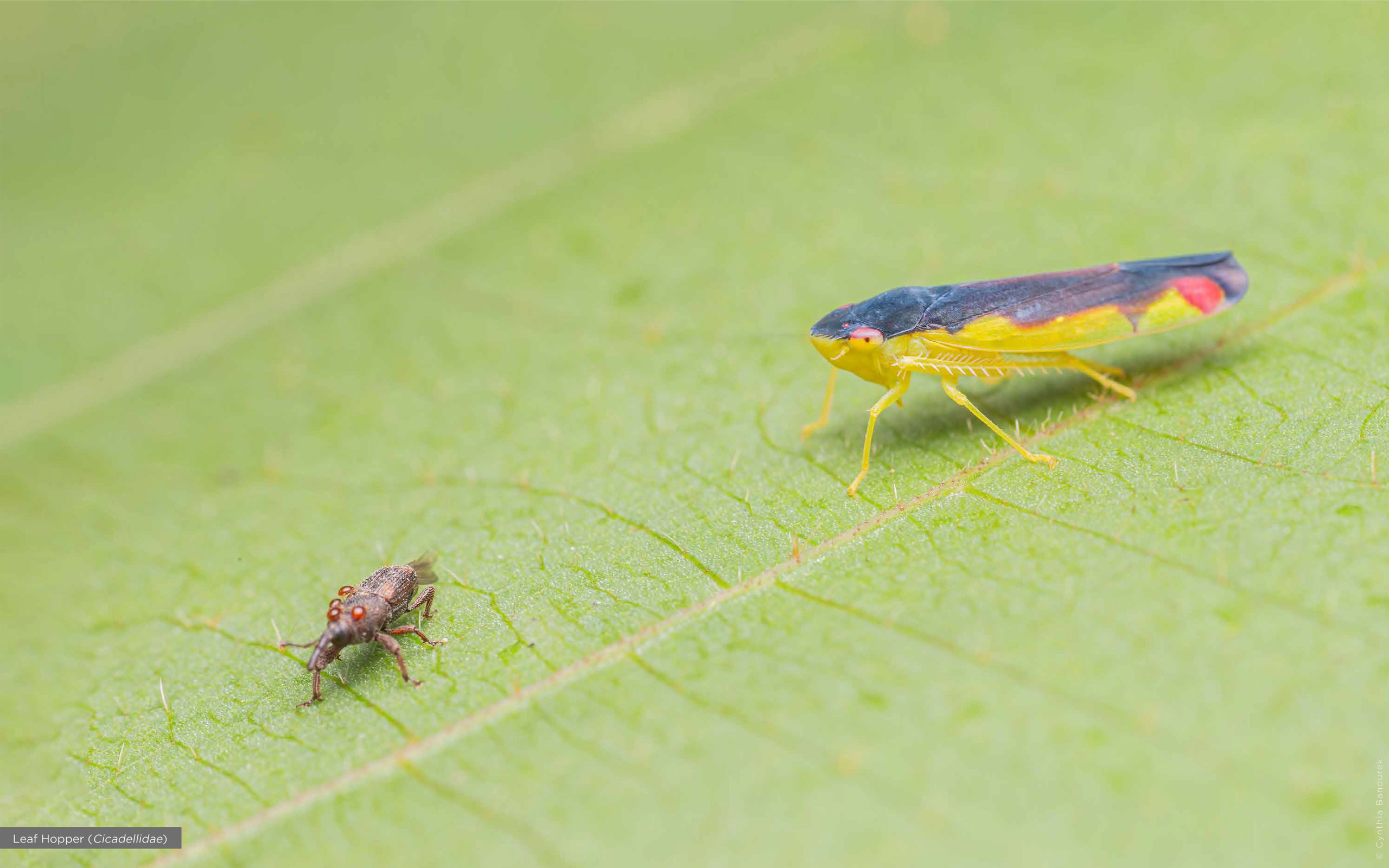 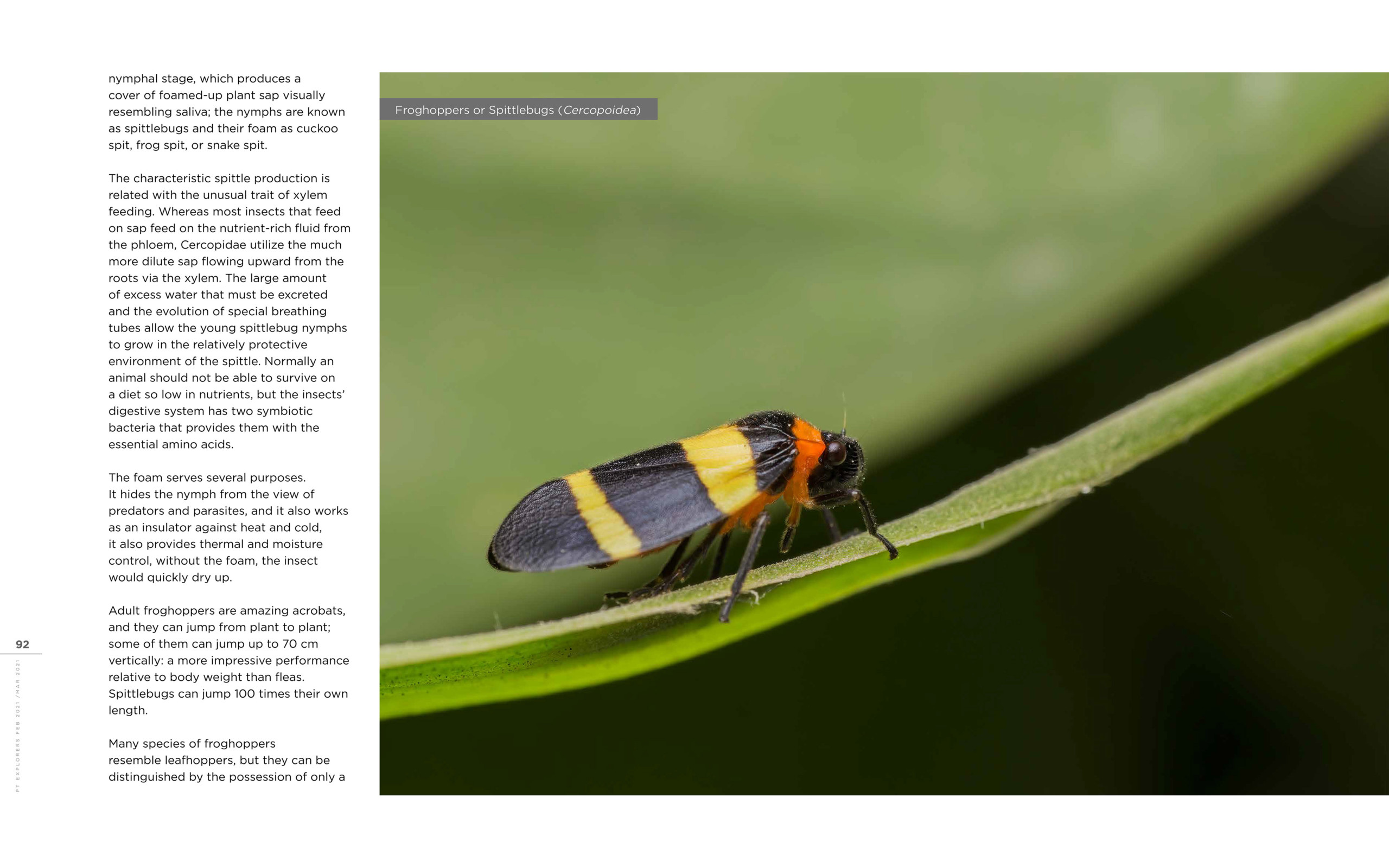 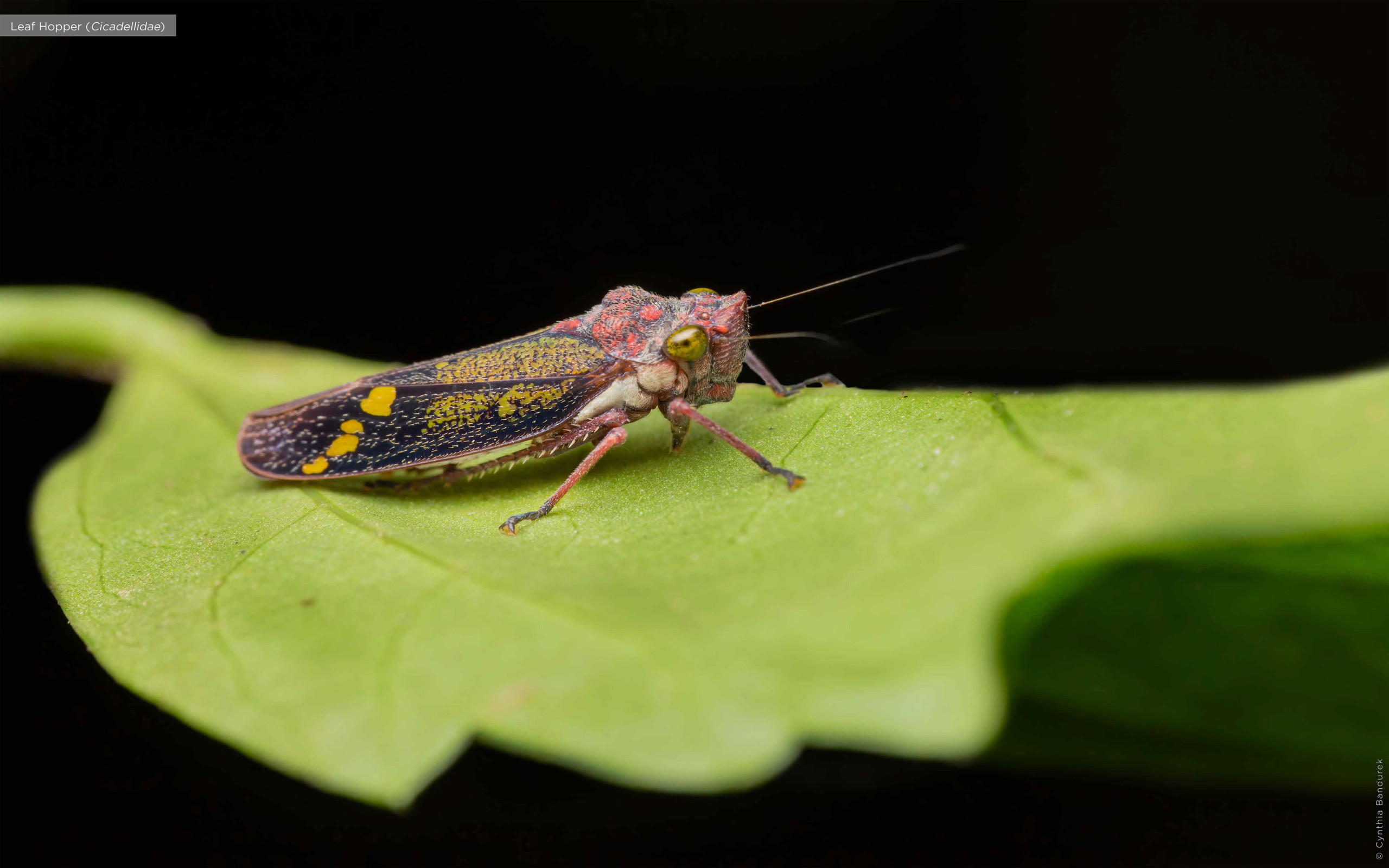 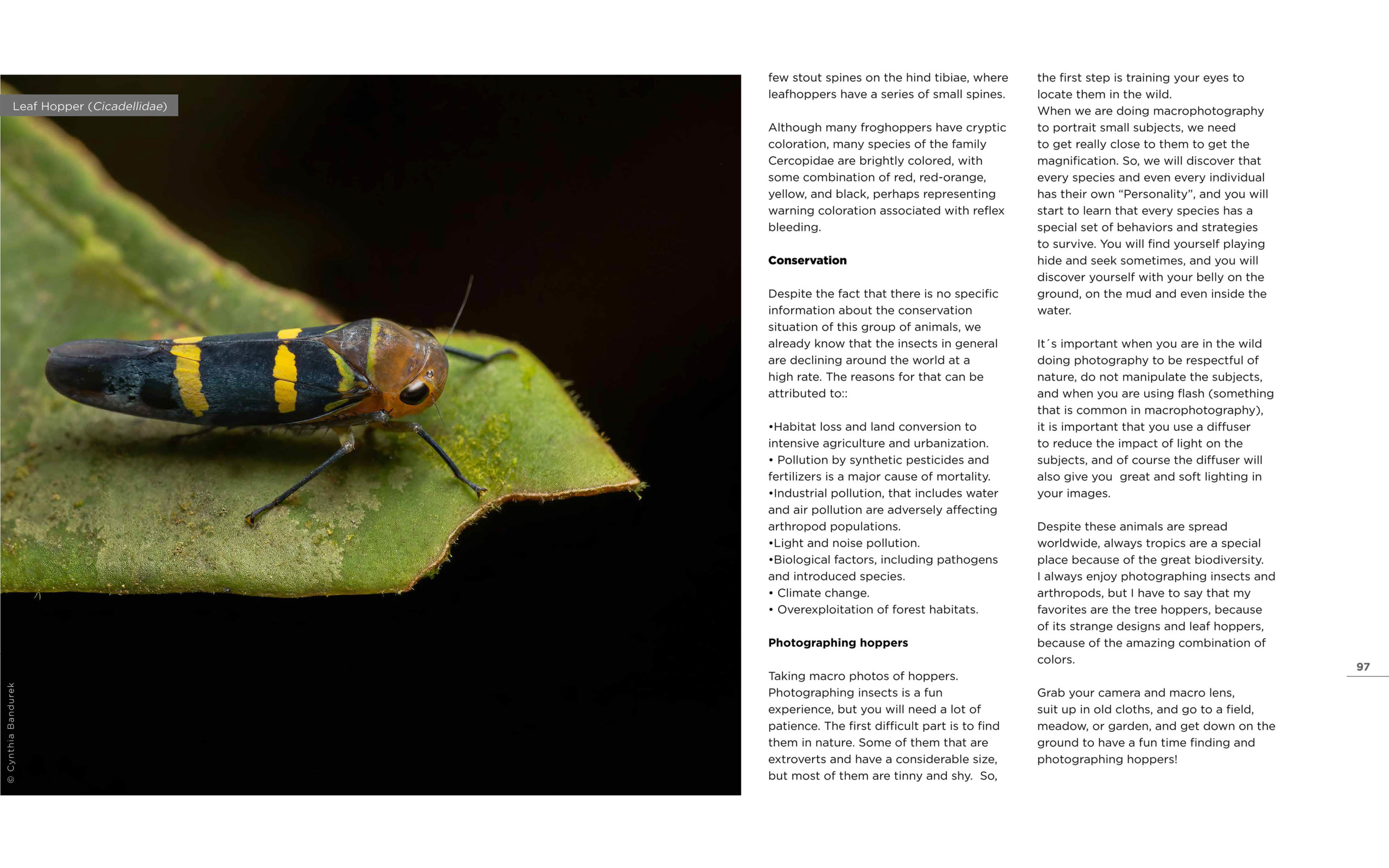 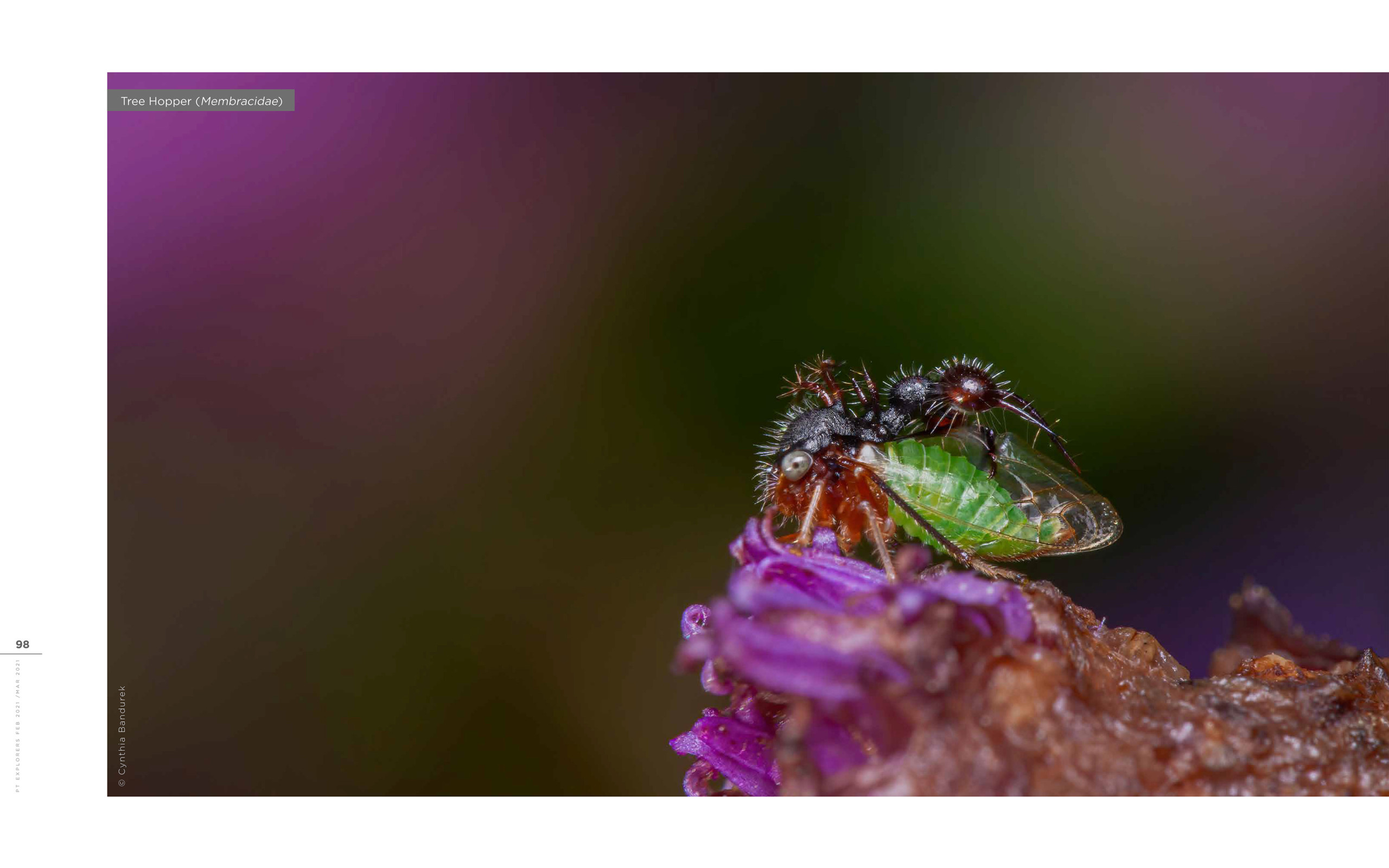